Enter your City name or Pincode

Watra Gam is a city belongs to Baramulla district of Jammu & Kashmir. It is sited at a distance of 24.8 km away from the district Headquarters Baramulla, 363 km away from its winter capital Jammu and 888 km away from the national capital Delhi. 78600 is the village code of Watra Gam. The city is very close to the banks of Nallae Frastahaar towards its North, Ningli Nalla River and Nambal River towards its West.

The village has no notable industrial or business development. Agriculture and Horticulture forms the major occupation for most of the locals in the village. Hindi, Urdu, Kashmiri, Gujari and Punjabi are the spoken languages of the residents of the village. 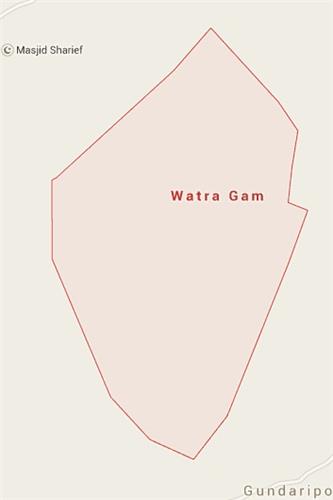 Watra Gam is sited amidst many popular tourist destinations of Jammu & Kashmir like Srinagar at 42 km away, Achabal at 110 km away, Baramulla at 24 km away, Mulanar at 65.4 km away and Budgam at 57 km away.

Watra Gam is a municipal committee city and it comprises of 8 wards for which elections are held every 5 years and 5 ward members are elected by the people to form the local government. The municipal committee of Watra Gam operates under Rafiabad sub division of Baramulla district. Watra Gam belongs to Baramulla Lok Sabha constituency; the current MP of Watra Gam is Shri Muzaffar Hussain Baig. Watra Gam comes under Kashmir valley administrative division of Jammu & Kashmir.

Srinagar passport office is the regional passport office for Watra Gam jurisdiction where passport application can be obtained and can be submitted.
Srinagar Passport Office
Address: Boulevard Road
Srinagar, Jammu and Kashmir-190001
Phone no.:  0194-2451193, 2451203, 2451401

Comments / Discussion Board - About Watra Gam